Once there was a time when books came alive 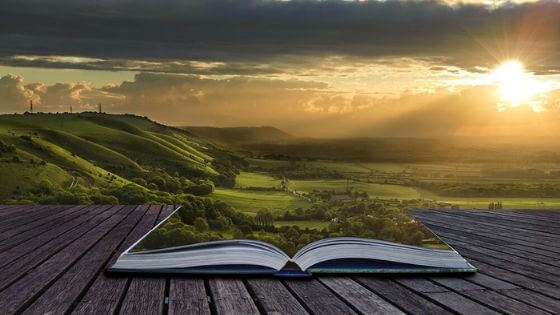 My sons are baffled when I talk about my Malaysian childhood. They can’t imagine growing up without TV (let alone the internet). And smartphones, of course. It’s another world to them. And now, to me.

We didn’t have TV for many years and no-one had a computer. Imagine that! They weren’t even rumoured in our world. So I didn’t miss them, because how could I?

That meant my brother and I spent a lot of time outdoors, exploring the Chinese cemetery, the rubber plantations and jungle remnants behind our house. There were giant toads in there, with bodies as big as my head. There were bird eating spiders so huge they’d dwarf a dinner plate. Their webs, horribly, spanned the tracks we roamed. There were clear streams with little neon fish in them and red dirt where the trees had been felled.

My brother and I loved to roam in the Chinese cemetery. It was covered in ‘lalang’, grass sharp enough to cut your hands and taller than our childhood heads. We were wandering through it one soporific, sunlit afternoon when a king cobra loomed over us, hood flaring. The sound of its deadly hiss has wiped out all memories of what happened next, but I’d guess that we ran screaming for home.

The Chinese tombs were carved with unreadable characters and laden with offerings for the dead. There were tiny tea-sets, complete with pots and thumbnail-sized cups. There were incense sticks and flowers. And many of the graves had black and white portraits of their residents, protected under bubbles of glass. It was creepy to think of their decaying bodies under our feet.

The Chinese always had the best funerals. Lots of thumping drums and spectacle. They burned paper effigies of desirable objects so the dead might have good things in the afterlife. Along with piles of money, of course. I always thought the Chinese dead had the most fun. They got to drive paper sports cars around in heaven and wade through ankle deep piles of cash scattered through the halls of their marble mansions. Nowadays they get designer handbags, mobile phones and shoes.

We took refuge under the water tower when the sun was too much. The water tower stood on stilts and burrowing hornets made tunnels in the soft earth beneath it. I was fascinated by their electric blue bodies until I heard that a swarm had stung someone to death.

The monsoons were a favourite time and my brother and I loved to jump in the instant lakes that formed in our garden. We shrieked at the blissful chill from the waterfalls that  cascaded down our hillside. And when we’d had enough of that, we fell onto our beds and read.

I don’t know if it was because I was young or because I’d grown up without TV, but books were so alive to me. The illustrations breathed and moved and I could wander inside them. They were 3D and I lived inside their worlds, felt no difference in reality between the places inside my head and the ones outside my mind.

I’ve revisited some of those books. They still hold my heart and I still remember how I felt inside those stories. I dance and thump the earth with Max in ‘Where the Wild Things Are’, I sing with the dwarves in ‘The Hobbit’ and I fly through space or see inside the brain or dig artefacts with the ‘Time-Life’ series.

Everything’s changed now, of course. And it will continue to do so. Our imaginations have been liberated and we have tools that let us create videos, images and text in ways that were unforeseeable.

And reading (and listening) will always be magic. There’s something alchemical about taking words and envisioning a world inside your own mind, bringing it to life letter by letter, leaf by leaf. There’s work to do, a co-creation process between you and the author. You make that world together and it takes two for it to happen.

You can escape your existence, live a thousand other lives and hang on to precious places that can never be taken away.

As for the places that my brother and I roamed? The Chinese cemetery is still there, but more crowded now. The rubber plantation is gone and only a little jungle remains. I suspect the giant toads, the bird-eating spiders, the hornets and the king cobra are all long gone. They terrified us but the world is poorer without them.